The History of Incorporation

The History of Incorporation

In 1924, three years before the incorporation of the Village of New Hyde Park, a Board of Trade was formed, which was composed of business people and interested citizens, who were concerned with the rapid growth of the town. A committee to study the expediency of incorporating the community was selected. The members were William Bowie, Jr., Herman Baer, Horace Cross, Benedict Hauck, J. Edwin Russell and George Simon Sr.. The following year five new members were added: Michael Bossert, Eugene Denton, Otto Lundin, Hugh O’Brien and August Vinski. Marcus G. Christ, by then a practicing attorney with a growing law practice, was counsel to the committee. The study extended over two years and involved examination of existing village governments, interviewing officials of the towns and villages and examining the laws pertaining to the procedure for incorporation.

In early 1927, the committee submitted a report recommending the village be incorporated. A petition was drawn up to incorporate the New Hyde Park Fire District as the Village. This did not succeed. Then the committee selected an area of ONE SQUARE MILE and Mr. Charles Weckerle prepared the necessary description and map defining the village limits, substantially as we know them today.

The residents of the described area held a referendum on August 19, 1927 and the majority vote was in favor of incorporation. The certifications were filed in the office of the Town Clerk at Manhasset and with the Secretary of State in Albany. The Incorporated Village of New Hyde Park came into existence.

On September 15,1927 the election for Mayor and four trustees was held. Those elected were:

The first meeting of the New Hyde Park Village Board was held in the Fire Hall on Millers Lane, now the Bethany Bible Church, at 8p.m. on September 19,1927.

Incorporation of the Village brought to the newly elected officials and the people, all the advantages of home rule together with the realization that wisdom is needed to successfully administer sanitation disposal, highway construction, zoning and the drafting of ordinances to control the activities within the confines of the Village.

The following Items taken from the Minutes of the Incorporated Village, succinctly tell the story of historical events.

December 24th through 2&h, 1927 – Flags displayed in honor of the opening of the Park Theater and the New Hyde Park Bank

January 24,1928 – Recommendation from the Board of Trade to change the names of streets on the Village map.

Nov. 19,1929 – reported that all signs were on the streets and we would now apply for free mail delivery. Minutes also mention that bicycles operating on the highways of the Village after dark must have a lamp on them.

October 6,1931 – Village counselor reported that according to our ordinance the Village Board can grant the privilege to make a right hand turn on a red light – road commission was authorized to secure signs and place them on all corners.

January 19, 1932 – Special election to acquire by purchase from the School District, the school building on the southwest corner of Jericho Turnpike and New Hyde Park Road. Purchase approved – 211 in favor and 151 against.

September 6,1932 – First meeting held in new Village Hall. The building was dedicated on Saturday, November 12,1932 with music by the Sewanhaka High School Band. 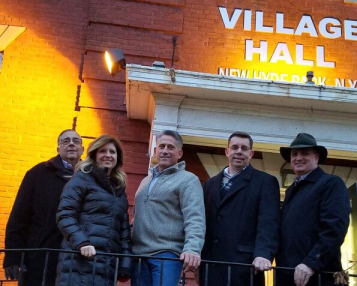 Mayor’s Letter to the Residents